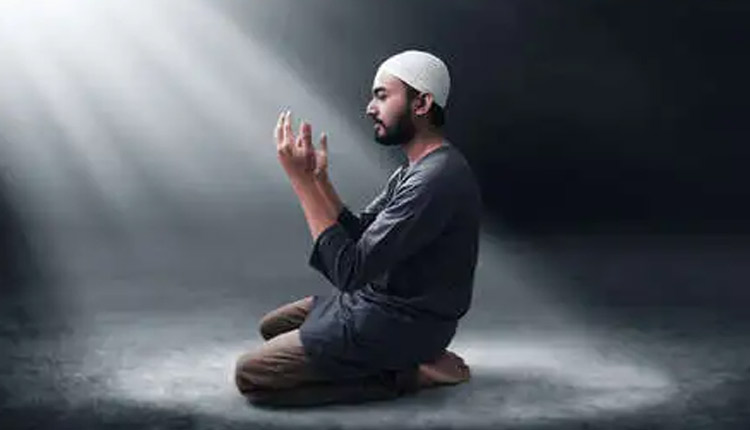 In the Quran, Allah has described His remembrance as the satisfaction of the hearts. (Quran 13:28) And in our society people are generally seen complaining that even by recalling God, the heart is anxious and uneasy. They recite praises daily, but life still goes through turmoil and unrest.

The fact is that satisfaction in this verse does not mean a state of peace that man experiences after taking the drugs. And after which man becomes detached from the world and its things. Rather, satisfaction here refers to the mental state in which man believes that the personality he has believed, whom he accepts his Lord and his Master, He is indeed the Creator and the Lord. Kingdom of the Universe is in His hands. And Whoever has given his hand to Him, Allah will not make him dissatisfied and deprived.

This is how I remembered Your forgotten memory in my heart in the night,

like a spring coming secretly in a desolated place,

The Quran has made it clear that the state of contentment of the heart in which man has no fear and no terror is given to the friends of Allah. It said:

“Those who are close to God shall certainly have no fear, nor shall they grieve. For those who believe and are mindful of God, there is good news in this life and in the Hereafter, the Word of God shall never change. That is the supreme triumph. (Quran 10: 62-64)

The Quran also states here who are these friends of Allah? There are no ‘elders’, but there are some true believers who prove their faith with piety. That is, the remembrance of the Lord covers them in such a way that in every weak moment of his life, he avoids sin by thinking that Allah is with me and watching me. These are the keepers and friends of Allah. And whoever is a friend of Allah, how he may suffer some fear and sorrow.

Take this as an example. If a person has a direct friendship with the President or the Prime Minister who is the most powerful person in the country, then no government department of that country can harass him. His work cannot be stuck anywhere.

When this is the state of a mortal man, the affairs of those whom Allah Almighty has declared to be His friends, can be assessed. They live a life of faith and piety and Allah protects them from every fear and sorrow. They live in the remembrance of Allah and Allah fills their hearts with contentment.

Here the question arises that the pious worshippers of Allah also suffer from afflictions too, rather afflictions mostly affects only such people, so how did these people rejoice in fear and sorrow. The answer is that fear and sorrow is the name of the condition of the heart. Those who live in the remembrance of Allah may be temporarily disturbed, but their hearts are filled with a state of contentment from which man is always at peace. The best proof of this is the life of the Holy Prophet (P.B.U.H) himself. He faced many problems in his life and on the occasion of migration, blood thirsty people came to cave (Ghar Thowr) looking for him. There was no one else with him except Hazrat Abu Bakr (R.A) but he was not frightened at all on this occasion. Even when Hazrat Abu Bakr (R.A) became worried about him, he reassured him in such a way that O Abu Bakr what is your opinion about those two, who third friend is Allah Himself (Hadith – Bukhari 3653)

When a believer encounters difficulties in life, his faith tells him that if Allah wills, he can easily get rid of them. So, he only calls his Lord and only seeks help from Him. As a result, Allah Almighty saves him from this difficulty. However, he also believes that these difficulties, even if they are not ending, are causing him to be elevated in heaven and are saving him from the sorrows of the Hereafter. Therefore, even hardships and afflictions give him the satisfaction that every moment of his affliction will cause to increase comforts for him in heaven. A person who lives in this state of contentment, has an exemplary peace of mind.

It is as if a competent student, who is busy preparing for the exam, stays up all night and is deprived of the comfort of sleep. But he suffers because he will see the best results in the days to come. Or a businessman invests in his business and works hard, hoping to make plentiful profit in the days to come.

It is a fact that there is great peace in Allah’s reminiscence. But for the person who has lived in a state of faith and piety. Not for a person who remembers neither Allah nor the Hereafter, under normal circumstances, but the purpose of his life is the pleasures of this world. Yeah! If he ever gets into trouble, he starts reciting chants to get rid of it and understands that is the remembrance of Allah which will give him peace.