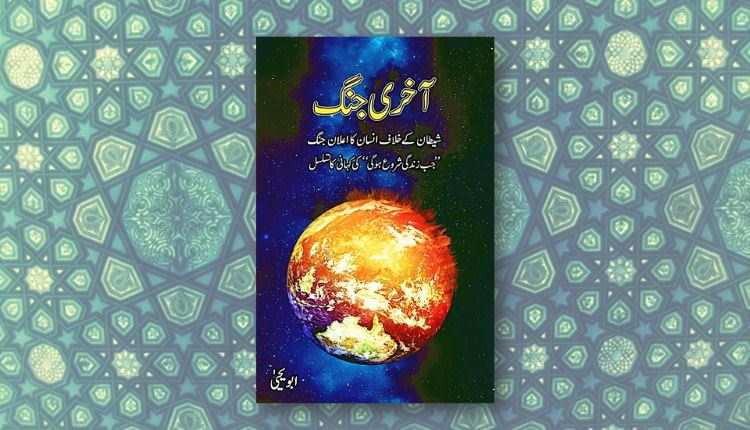 About “Aakhri Jang” by Abu Yahya

Get “Aakhri Jang” by Abu Yahya

“Aakhri Jang” is a sequel to “Jab Zindagi Shuru Hogi” and “Qasam Us Waqt Ki”. It is a captivating account of the historical rise and fall of the Jews and its resemblance with the Muslims of today.
In the main plot of the book, endeavors of the Satan were highlighted by depicting the ordinary house hold life and has practically been shown the intrigues of the Satan and satanic forces; the main story describes how he attacks the moral and religious foundations of the Muslims and try to destroy them. While in the sub plot the satanic forces have been shown manipulating and planning to devise ways to put an end to Muslims’ ethical, moral and religious base. The book also highlights the sectarian discord which has disturbed the very fabric of the Muslims. It also highlights the need to revisit the sectarianism and open the debate for the revival of pristine Islam. The book has not only pin pointed the issue but also has given the solution of the problem.
The writer himself speaks about the book “I have humbly tried to knock at the heart of the nation; I don’t know how many hearts will open themselves to the Quranic invitation to which I am calling them to. I am calling those who are determined to fight the last crusade against Satan… those who in response to the Quranic invitation will stand against Satan and for God crying ” here I am O’ God here I am” those who will respond to my call should keep in their minds two things. First that they will become the target of their sworn enemy i.e. Satan; Satan does not spare his enemies. But the second one is more important that is Allah never forsakes His friends. When the Lord of the universe is on their side; the entire world could pose no harm to them. The Lord of the world will not only protect them herein but bless them also profusely on the Day of Judgment. The victory lies with the Slaves of the Merciful in this crusade. There is only one condition that people don’t base religion on their wishes but transform themselves according to the wish of God as ordained in the Holy Quran. This is the message of the book”
The story has been told in a captivating style; the reader never loses the interest or feels the boredom of advice which we commonly feel when we are advised. It cherishes the goal of harmony, peace and revival of true spirit of Islam told in a characteristic style never heard of in the books of this kind.

Stay With Us
Popular Categories