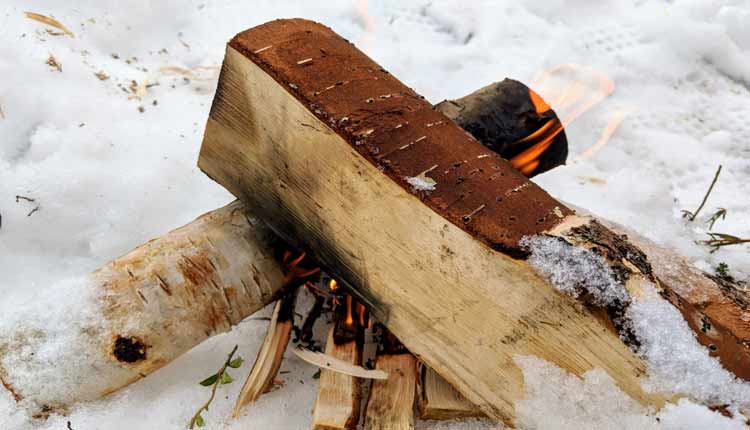 Air, fire, water and soil are the basic elements of life. Allah (SWT) has made arrangement for these elements to remain in abundance on the Earth; among these elements Fire, however, is the one which although directly available in the form of heat from the Sun but as such does not exist commonly in form of fire. Although Allah (SWT) has luxuriantly provisioned the fuel through which fire can be produced.

At present, natural gas is the cheapest fuel to get fire. However, throughout human history, wood has been used as a fuel for fire. For thousands of years humans depended on cutting trees and forests to warm their houses and hearth. Even today where natural gas isn’t available, the same fuel is the only source to acquire fire.

Those of you who have seen wood being used as fuel are well aware of the fact that dampness takes away the ability of wood to be used as a fuel. The more dry the wood is the quicker will it catch fire. The damp wood never burns; if anyhow it burns there will be a more smoke than fire.

The piety of the modern day Muslims is not different from the moist wood. Allah (SWT) has made a special arrangement, after the last Messenger ﷺ, to sustain a vanguard of Islam in the world. In the orchard of Islam Muslims could go on thriving like the trees; and these people keep the torch of righteousness alight by burning their own selves; but unfortunately the Muslim of a present day has forgotten his purpose of life; he has absorbed in himself the moisture of prejudices and wishes that he has virtually become a moist wood for God; such a wood, firstly, does not remain capable of using as a fuel if ever it is used, it emits smoke instead of fire.

The fire of Faith; heat of good deeds; and the light of morality erupt only from that being that has purified himself from prejudices, desires and self-gratifying desires; this refined being lives in the world, benefits from it but does not make it his ultimate purpose; he does not make his wishes a demi-god; he does neither make carnal desires nor the material cravings the pivot of his life.

Such a pious leads a life considering the world a stopover stay. The attractions of the world do allure him but he cannot afford to give up the eternal kingship of paradise at the cost of this temporary temptations.

The best use of his time, wealth and ability is to earn Paradise; nonetheless he is not a hermit; he marries, raises family and struggles for the living but he knows he has to live in a limit, not in a lust; has to struggle for need not desires; he is conscious of the fact that the world is his examination paper. The success in hereafter is impossible if he does not give this exam. But he knows that this world is an examination room, not a rest room. This belief makes him a dry wood for God’s work.

On the other hand, those who cast away the hereafter as their destination, their piety only produce smoke instead of fire- the smoke which produces neither heat nor light. They spend their wealth hypocritically; they worship ignorantly; they stand up to support the religion with prejudice; all of their piety remains subservient to their desires and wishes.

This moist wood cannot become a fuel in this world; however, they will surely be a fuel in the Day of Judgment; but of the Hell; the Hell where human beings and stone will be burnt together.