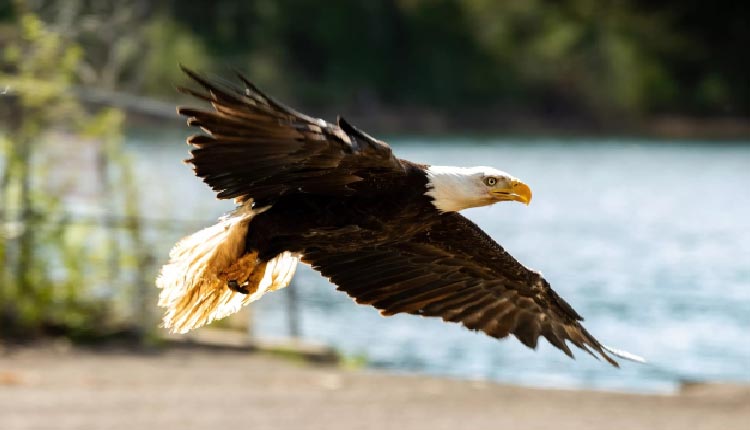 Wind is an exceptional blessing of God for all creatures. But when this wind starts blowing fast and takes the form of a storm, it turns into a great natural disaster. All creatures become helpless before its power. This windstorm makes humans hide themselves in shelters. It uproots big and tall trees. Most affected by the storm are the birds which under normal conditions fly in the air. But after windstorm, the same air becomes fatal for them. The people who have observed windstorm, they know that onslaught of strong winds drags birds away and often hits them with a rocky obstacle.

However, one of the birds is the one whom this strong wind raises rather weakens. This bird is the eagle. Like other birds, eagle is also not that strong to withstand a great natural disaster like the windstorm. But the eagle senses the silence that comes before the wind. It is the law of nature that before the windstorm comes, the wind stops and a deep silence prevails. The eagle understands this signal and immediately flies to the heights. Then the gusts of wind begin to blow, but their force is higher near the surface of the earth and lower at altitude. The eagle spreads its wings in this relatively weak wind and this wind keeps raising it until he reaches the point of altitude where he escapes the reach of the strong winds and begins to fly at his own will.

This is not the difference between the eagle and other birds that he can withstand windstorm and others cannot. Real difference is that he is bestowed with the predictive ability because of which he gets out of the way before the strong wind blows and then raises using the tolerable wind.

Man is also weak before the storm of difficulties and accidents, like other birds. But God has given him an extraordinary predictive ability. And if he wants, he can estimate tomorrow with the help of it. Man cannot remove death, disease, accidents and his and his children’s needs but he can roughly guess them. And then he can somehow prepare on this base. For example, he can improve his diet to be safe from diseases; can arrange good education for safe future of his children and can save some money for accidents or diseases.

If the way eagle chooses before windstorm is suitable for man then the way of eagle after windstorm is suitable too. This is, instead of fighting the wind, spread the wings and surrender himself to it. Which means whatever the circumstances be, surrender his matters to God along with putting as much effort as possible. As a result of this process, man is always at peace. His damage is minimal. And then the nature somehow compensates for that loss under its own law. The way to be anxious as opposed to be patient, not only gives nothing to man but also makes him suffer more.

To wait with optimism and patience is one the highest attributes. This quality not only saves man from the difficulties of life but also keeps him steadfast when difficulties arise. These are the attributes necessarily to be produced in everyone of us. These qualities are the surety for success at individual and collective level.