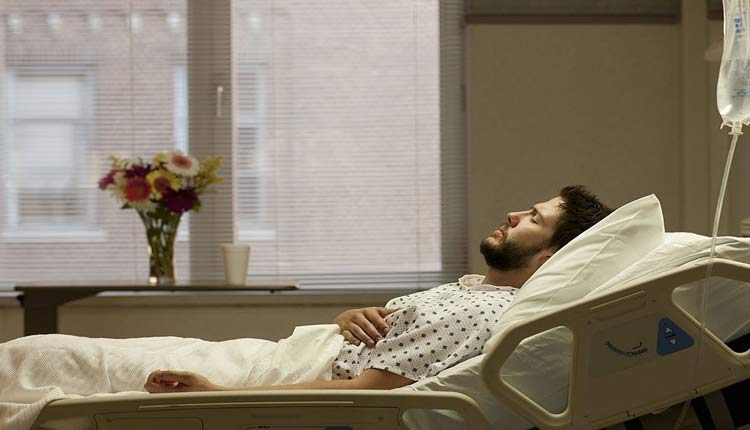 Life was going great; he would go to the office in the morning; play tennis in the evening and go home at night chatting with friends in the pub and start the routine again the next day. It was going on normally but then a minor incident happened and the whole course of life changed. He was crossing the road. Suddenly a speeding car came out of the street. He jumped into the air, fell on the sidewalk and fainted. An ambulance came and rushed him to the hospital. Given the body was bleeding profusely, it was immediately transfused.

He stayed in the hospital for a few days and then returned to normal life. A year later he had forgotten about the accident but one day he had severe abdominal pain. He was rushed to the hospital again. Examination revealed that his liver was almost unresponsive. He has not have many days left in his life. This news was heart-breaking. He lost his courage and handed himself over to the doctors and the hospital. When the doctors started asking questions from him, it was found out that he does not smoke alcohol or cigarettes. In the area of London where he lived, the water, the air and the food were all clean and he had never been sick in his life. There was no accident; no bad thing in his life except a road accident. Then, how did the liver stop working? Doctors were perplexed by this question. During Philip’s interviews, it was discovered that he had been given blood after the accident, so there may have been some element in the blood that destroyed his liver. Blood donor was found; he had donated seven people at different times. Their data was collected and it was found that out of those seven people, the liver of three people had been destroyed. Doctors admitted the donor and started experimenting. Later, they discovered that his blood contains a strange virus. It was separated from blood.

Before I go any further, let me tell you, two types of viruses might have been found in patients after blood transfusions in the 1960’s. Experts named the first virus Hepatitis A and the second Hepatitis B. They both reduced red blood cells; the patient had jaundice and it disappeared in a few days. It did not cause permanent damage to the liver. The virus found in the body of Philip and his donor hepatitis A and B was different from both.

It was frightening and it destroyed the patient’s liver in a matter of days. The team of experts included a young doctor named Michael Houghton, an expert in the field of virology. He took the file of Philip and the donor to his home and worked on it for two weeks until he identified the virus. He said the virus is new; it is different from both hepatitis A and B and it directly damages the liver. Michael named the virus Hepatitis C and told his professors that the virus would be frightening in the future and would swallow the lives of millions of people.

So we should immediately sound the international alarm. The professors referred Michael Houghton’s discovery to the World Health Organization, and the WHO reported hepatitis C to the world in 1978. Applause began for Michael Houghton, who became a medical science star at the age of 28 and was invited by universities to give lectures. He was happy, but then in 1980 he went to the University of Rochester in New York for lecture.

During the lecture when he started talking about Hepatitis C, a doctor in the hall raised his hand and said to Michael, Sir! Did you finish your job after finding the virus? This question was unexpected for Michael, he got perplexed for a few moments and then it came out of his mouth, No! now I am also looking for a cure for this virus. The doctor applauded and then said, “Sir, I want to join your team.” Michael nodded in affirmation, he took Michael to the cafeteria after the lecture and from here on, the interesting research of the world started.

The young doctor’s name was Harvey J. Alter and he was an infectious disease specialist at NIH Research Hospital. Alter began research with Michael, while Charles M. Rice, a researcher at the Washington University School of Medicine, also joined them. He was an expert in biochemistry and worked at the WHO and NIH. Dr. Charles agreed on making Hepatitis C in the laboratory and experimenting that on chimpanzee.

Dr. Alter confirmed Dr. Michael’s research in 1988 and surprised the world by telling them that the virus was spreading rapidly and would spread all over the world in a few years. This revelation was frightening and then there was the question of controlling it and for that the team needed Dr. Charles M. Rice. He got busy in the laboratory and cloned hepatitis C in 1997. He inserted the cloned virus into the body of chimpanzee.

The virus reached its liver, multiplied and began to digest the chimpanzee’s liver as soon as it reached there. Dr. Charles’ team continued to observe chimpanzee, later they applied different medication on it and observed its results. The experiment continued until 2000. After the experiment was completed, Dr. Charles sent his report to Dr. Alter and Dr. Michael, who both included their feedback and submitted the report to the WHO. Thus the cure for hepatitis C was discovered in the world.

Humanity has survived falling into the pit of liver cancer. These three doctors are benefactors of humanity. The Nobel Prize Committee awarded them Noble Prize, on October 5, 2020 for their valuable services in the field of medicine. Hepatitis C affects 320 million people worldwide, of which only 30 million are aware of their disease, while 290 million people are hiding the virus inside their livers.

Every year 1.8 million people are infected by this disease in the world. Amongst them, 0.4 million people die. Egypt ranks first in the world in hepatitis C; 6.3% of its population is infected with this dreaded virus. Pakistan comes second after Egypt. Our country’s 15 million people are suffering from it. The highest number of patients are in five districts of Punjab, Khanewal, Nankana Sahib, Sheikhupura, Okara and Faisalabad, while people in other areas are not even aware of it. It is a wide-spreading disease in Pakistan.

You would be surprised to know that there are 2.4 million cases of Hepatitis C in the United States and only 215,000 in the United Kingdom. These countries are getting free of this infectious disease but in spite of that, after 40 years of continuous research, they have discovered the cure. After which, the world is deciding that it will eradicate this disease by 2030 and you will be even more surprised to know that despite being the most sick patients in the world, Pakistan and Egypt has no contribution to make in this research.

We have not been able to collect the data of total patients in fifty years; we have not been able to make the public aware about Hepatitis C; we have not yet made it mandatory to test for Hepatitis C in the country despite 15 million patients. However, the infidel doctors of America and Britain have worked day and night for forty years to find a cure for us and they are swearing to eradicate this disease from Egypt and Pakistan in the next ten years. You see the honesty of us, the believers, and then look at the infidelity of the nonbelievers.

We have entrusted the task of curing our ailments to the nonbelievers. Today we are also praying to Allah in the mosques for the treatment of corona asking the Almighty to give courage to the nonbelievers to find the corona vaccine so that we can become stronger by using this vaccine and then we can destroy the infidels who make the vaccine; we can destroy their infidel laboratories and research centers; Oh Almighty, give us courage.

Sometimes I feel that even the will of God must laugh at our prayers; nature must also have smiled. [Courtesy: Express News]