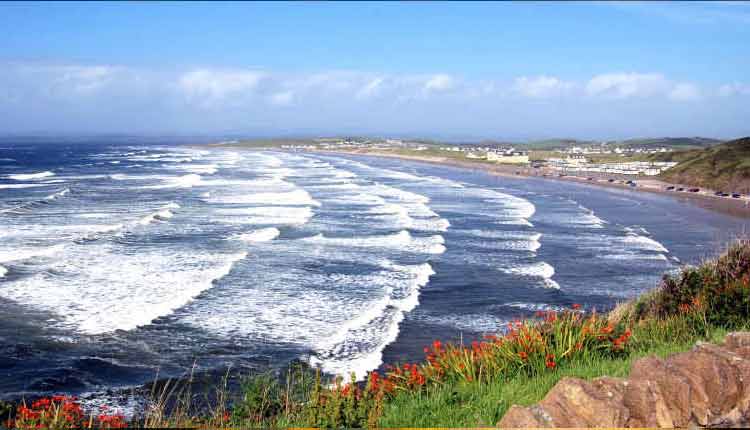 Cape Mount is the most beautiful beach in Karachi. This is the last picnic spot beyond Hawke’s Bay. The real beauty here is that while traveling on the unpaved road you will see a smooth land all around. But if you walk hardly one to two hundred meters on the left side, you will suddenly realize that you are actually standing on the surface of a smooth mountain. The greenish blue water far below this mountain gives the freshness to your eyes. Especially in the evening during sunset, this scene is so much appealing.

There are many natural paths to descent from the mountain plain by which people approach to this cleanest and smoothest beach in Karachi and enjoy the smooth waves along with their family and others on this clean and sandy beach free of rocks.

However, this is the story of the past when human life, wealth and honor was not as cheap in this country as it is today. There is an anecdote from that time. Some people went on a picnic at Cape Mount. A young girl was sitting under the shadow of the mountain some distance from the shore when a mountain rock, decayed due to the onslaught of the wind, detached from its place and fell straight down on the girl. As a result, the girl’s body was dismembered. The torso, the legs and the hands fell away.

The incident was also reported in the newspapers and a picture of the girl’s mutilated body was also published. When I saw this picture, I thought that the cosmic forces follow the laws of matter. These laws are completely blind. When they act, they don’t care if someone’s life is being lost or someone’s world is being ruined. This is the principle of the material world.

However, the matter of the human world is that Allah Almighty has given man a moral sense after creating him in this material world. Man acts by examining his every action in the light of this moral sense. He can never become like the rock of Cape Mount which without thinking will leave its place and will result in the death of someone. Without this moral sense, the power and intellect that man has been given is so dreadful that he can ruin this world. If this moral sense is not alive, then no law of the world can control this destructive ability of man.

Unfortunately, our modern reformers seem completely unaware of the fact that society cannot be reformed without empowering moral existence of human beings. They believe that only the rule of law can fix issues in this country. This is incorrect in every aspect.

The fact is that the reformation and improvement of societies comes when the moral sense of the people is fully revived through education and training. The lesson of protection of life, property and honor should be made a part of their nature. The superior values of human emotions of justice, benevolence and compassion should be highlighted to them. This requires a moral movement. Without this moral movement, no society has ever been reformed in the past and there is no possibility of it in the future. Without it, our oppressors can change; cruelty and barbarism cannot be eradicated from society.